How to get there

You can get to Kyrgyzstan in three ways:

Air is the most preferable at the moment. There are two international airports In Kyrgyzstan: “Manas” in Bishkek – the capital and the airport in Osh city – southern part. The main international connections are Moscow and Istanbul. There are also flights to the Emirates, Almaty, Toshkent, Dushanbe and some Russian cities.

The main flights arrive in Bishkek and Osh early in the morning, so all programs look at it.

By railway. Direct trains connect Bishkek with Moscow and Yekaterinburg. Previously, it was a very popular mode of transport. Now, when air travel is very accessible, our guests do not use trains.

By car it makes sense to go to Kyrgyzstan, if:

There are some foreign cars in Kyrgyzstan. Perhaps a more biased attitude from the police, but it is not a problem for non-commercial transport. When you are crossing the border the rule "time + nerves = money" works well, mainly this applies to Kazakh border guards. 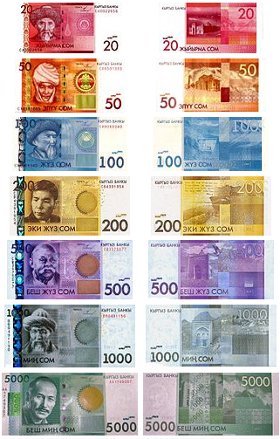 The national currency of Kyrgyzstan is the SOM (KGS). The currency can be exchanged in banks and currency exchange offices. Normal exchange is only for large bills denomination. This is the euro and US dollars 50, 100 and higher, Russian rubles from 1000 rubles. The small bills rate is much lower and and the exchange is not always available. Also lower is the rate for banknotes having minor damage, printing or contamination. Damaged EURO is often impossible to exchange, even in banks.

Cash ATMs and currency exchange points can be found at airports, banks and supermarkets of large towns. In villages and roadside cafes, paying off an electronic card is problematic. You can issue a Visa card only in large restaurants and supermarkets.

Payment for goods and services is made national currency. In hotels and some guest houses you can pay US dollars.

There are several local mobile operators operating in Kyrgyzstan that provide roaming both with foreign mobile companies. There are only three: Beeline, О!, Megacom. But it is much easier to buy sim cards of these operators with a connected tariff or the Internet.

No mobile connection in the Kyrgyz Mountains.

Internet in Kyrgyzstan is gaining momentum. Free WiFi is available in all hotels and restaurants. Most of the guest houses, hostels and cafes of large settlements provide wireless Internet access. Still bad with the Internet on the periphery.  Mobile Internet is quite cheap, but far from settlements it is not available.

Kyrgyzstan is famous for its variety of dishes of national and European cuisine. The abundance of fruits, vegetables and spices will bring any gourmet to delight. According to the often traveling tourists, here is the most delicious and varied food. Local restaurants have collected food from almost all over the world. Anyone can choose their own food to taste. It is equally delicious to eat in an expensive restaurant, or a simple dining room. Sometimes the quality of food leaves much to be desired. Pay attention to the filling of the cafe, it is usually a sure sign of a good place. The only thing is the dishes are usually meat. Warn in advance if you prefer vegetarian food.

The culture of coffee drinking in Kyrgyzstan is not common. Decent coffee shops can be counted on the fingers, and in the restaurant you can serve instant coffee. But tea is drunk everywhere and in too much.

Products can be bought in the supermarkets or on the markets. There are also many small shops on the streets.

Water in urban water supply is clean, often drinking. But for visitors it is better to drink boiled water or buy bottles.

Our priorities are safety and comfort. For each program, there are maximum persons per guide for the safe conduct of the program. For each car there is a maximum number of passengers (usually it is less than the number of seats) for a comfortable. The same applies to tents and others.

For example, if the maximum number in a group of 4 people per 1 guide, and all of them are placed in one car, the price will be the lowest. Of course, with a group of 2 people, they will share the same costs for the guide and transport between two and the price will rise. And unnatural - with a group of 6 people the price does not decrease, but may even increase. Why? We add one more guide, his accommodation and meals. This is a guide for 3 people. There are many programs where we cannot use a minibus due to deteriorating terrain, and we just run the risk of not getting to the place. We have to add one more SUV. It turns out as two programs for 3 people.

But we are very flexible in the organization. We develop our programs ourselves, we prepare and conduct them ourselves.

The cost can be reduced!

• If a big experienced group, then a group leader can act as a guide's assistant, assuming all responsibility.

Advanced. Distance 10-15 km. Altitude difference up to 1200 meters. Altitudes above sea level up to 3500 meters. In places there can be no trails, grassy slopes, screes.

Autotourism. The route is mainly along the roads of republican significance. Rest days with short walks on picturesque places or city tours are possible.

Jeep-tour. The route is mainly along gravel and dirt roads accessible only in summer and only for 4wd vehicles. There are hiking trips to interesting places or city excursions.

Extreme. A route with off-road elements, an attempt to pass through problematic places (passes, gorges, etc.). It is use only prepared off road cars. Probability of using shovels, winches, etc. There are hiking trips to interesting places or city excursions.